@ngrx/component-store selectors have a debounce option that lets the state settle before emitting. In this article we will demonstrate what this means in practice before walking through the code that makes this possible.

In this post I want to take a closer look at the {debounce} config option for the select method. Here is what the docs say about debouncing.

Selectors are synchronous by default, meaning that they emit the value immediately when subscribed to, and on every state change. Sometimes the preferred behaviour would be to wait (or debounce) until the state "settles" (meaning all the changes within the current microtask occur) and only then emit the final value. In many cases, this would be the most performant way to read data from the ComponentStore, however its behaviour might be surprising sometimes, as it won't emit a value until later on. This makes it harder to test such selectors.

At first I did not understand what this meant so I built an example in Stackblitz to see what difference the flag made to a selector.

We setup the component store as part of the AppComponent with a boolean toggle state.

We then create two selectors on this toggle, one which we debounce and the other that we do not.

As the docs speak about selectors being synchronous I have created two methods that watch the toggle state and then toggle it back. A bit like a naughty child turning the TV back on as soon as you turn it off!

The important difference is that we include a delay(0) in the second toggler to make the toggleState call asynchronous.

We trigger these actions by two different buttons in the demo app.

When we click on Update Sync only the selector with debounce: false emits any values. Without debouncing the selector emits every changed toggle value.

However, the selector that is debouncing emits no change. Why is this? The value of the toggle starts as true, gets set to false before being set back to true. This all happens synchronously, (in the same microtask) and is debounced by the debounceSync function. At the end of the microtask the value is still true and the selector does not emit. There is a distinctUntilChanged in the select method that ensures this.

When we click on Update Async both selectors now emit values. The debounceSync function, as the name suggests, only debounces synchronous updates. Now the debounced selector emits every toggle change as each occurs in a different microtask.

What does this all mean?

As the docs suggest using debounce: true can improve the performance of your app as the selectors will only emit new values at the end of a microtask. In our demo app this means the selector would not emit at all resulting in no further actions / re-rendering. Debouncing avoids unnecessary work.

State emitted by a debounced selector may be more consistent or logically correct. For example, if the selector relies on multiple properties, which are interdependent, then we want them to have reached a valid state before the selector emits. Setting {debounce:true} ensures we do not emit all the intermediary values which could originate from a temporary 'invalid state'.

The code is located here in NgRx and can also be found in rxjs-etc where it was originally created by Nicholas Jamieson. As it is published with the MIT license and all conditions are fulfilled by NgRx they are able to avoid having an extra dependency here.

Inside the select method of component-store is the following line of code. This takes our debounce config value and either adds the debounceSync() operator or returns the original source with no change.

What is this debounceSync() operator doing?

Below is the code for debounceSync(). When I first looked at this I had no idea what was going on! So I reached for our trusty friend console.log and started experimenting in Stackblitz. You can try this too here.

To run the code I setup two streams. One uses interval to be asynchronous and the other uses from to run synchronously.

This along with the logging I added into the debounceSync() function gave me the following output. 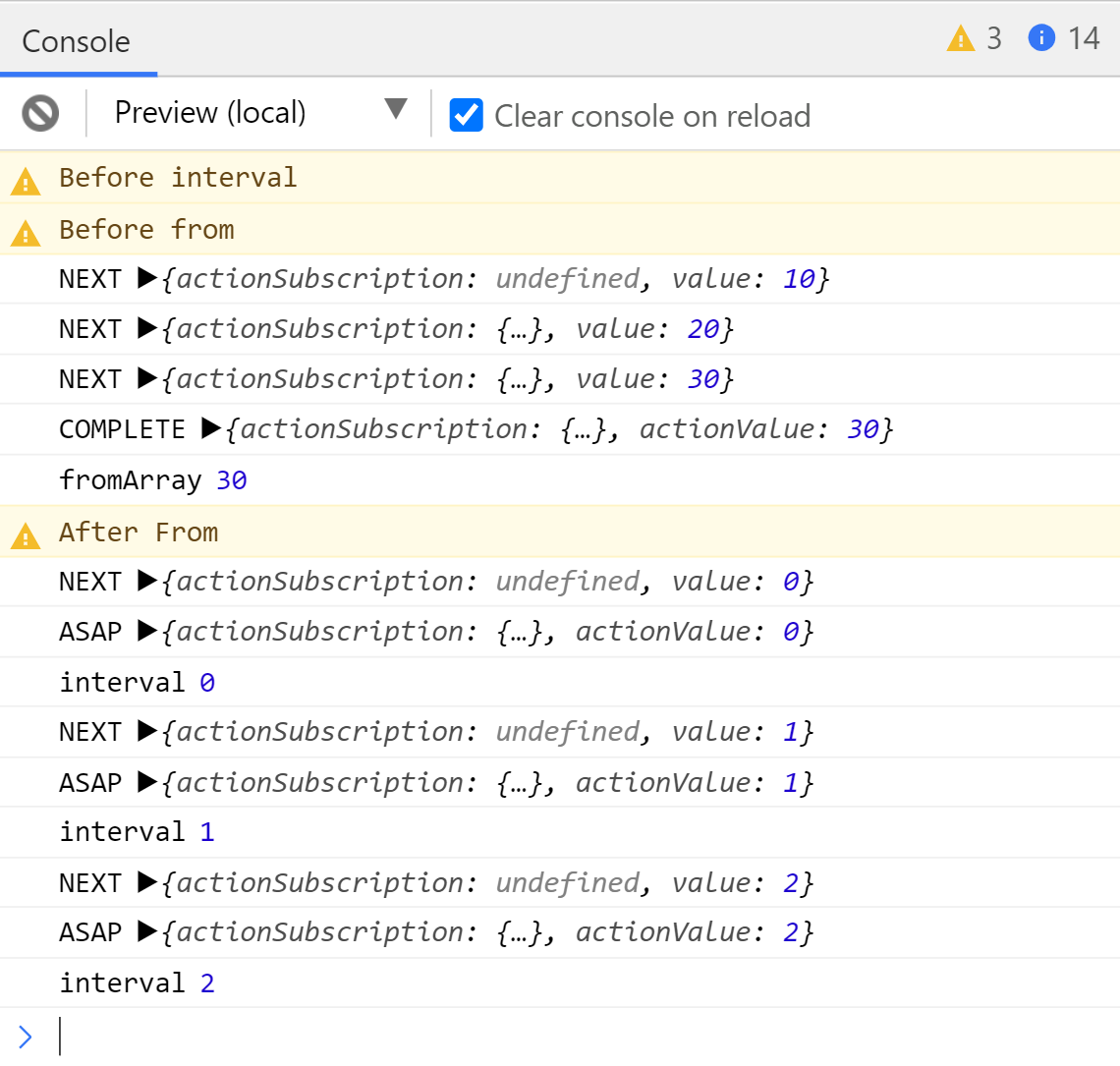 The first thing to notice is that the interval code does not appear between the Before interval and Before from. This is because this interval code is running asynchronously. What's more interesting is that it appears right at the end, even after our fromArray code! This demonstrates how synchronous code is executed before asynchronous and that Observables can run synchronously.

This behaviour comes down to the Event Loop. If you are not familiar with the Event loop it would be worth reading this fantastic article to learn more before carrying on. (It even has animations to demonstrate it!)

If we compare the two outputs we get an idea of what the code is doing. On the left we have the synchronously from stream and on the right the asynchronous interval stream.

asapScheduler: Perform task as fast as it can be performed asynchronously

In the call-back it passes the value to the next observer in the chain and also clears the current actionSubscription.

With a fully synchronous event stream the actionSubscription never gets to fire. This is because all the synchronous events are on the call stack and these must be executed before the asapScheduler can run. So any new values just update the internal actionValue without being passed to the next observer.

As we are using the from operator it completes synchronously after the 3 values are emitted and before the asapScheduler has the chance to run. This is why the complete method checks for the existence of an outstanding actionSubscription and if it is defined it then emits the current actionValue to the observer before completing. Without this check no values would be emitted.

Note with the synchronous code only the last value actually gets emitted. This is why this function is called debounceSync because it debounces synchronous events.

The debounceSync() operator works by recording each new event in a local variable actionValue which will only be emitted when the observable completes or after the call stack has been cleared (all synchronous events have completed). The asynchronous call-back uses the asapScheduler to keep any introduced delay to a minimum.

After writing this article the following section in the docs makes a lot more sense to me.

Sometimes the preferred behaviour would be to wait (or debounce) until the state "settles" (meaning all the changes within the current microtask occur) and only then emit the final value.

At this point it is worth noting that as long as all the events are synchronous you may find that debouncing enables feedback loops in selectors to stabilize before emitting. Our example has not covered this use case but it is the main advantage of debouncing selectors as I see it.

This function is equivalent to using the debounceTime operator with a delay value of 0 setup with the asapScheduler.

Alex Okrushko, from the NgRx core team, said that this was the first thought for synchronous debouncing however this has the side effect of creating extra timers that are not required for this specific behaviour. Nicholas Jamieson suggested to use this custom operator, debounceSync which he created to ensure the best possible performance for the NgRx Component Store.

I learnt a lot about this feature from the NgRx Discord channel which you should definitely join if you have not already!

We have seen how component store is benefitting from debouncing selectors but what if you could apply the same kind of debouncing to your entire Angular app? This is exactly the kind of work that is happening right now with event coalescing and the ramifications could be huge for application performance.